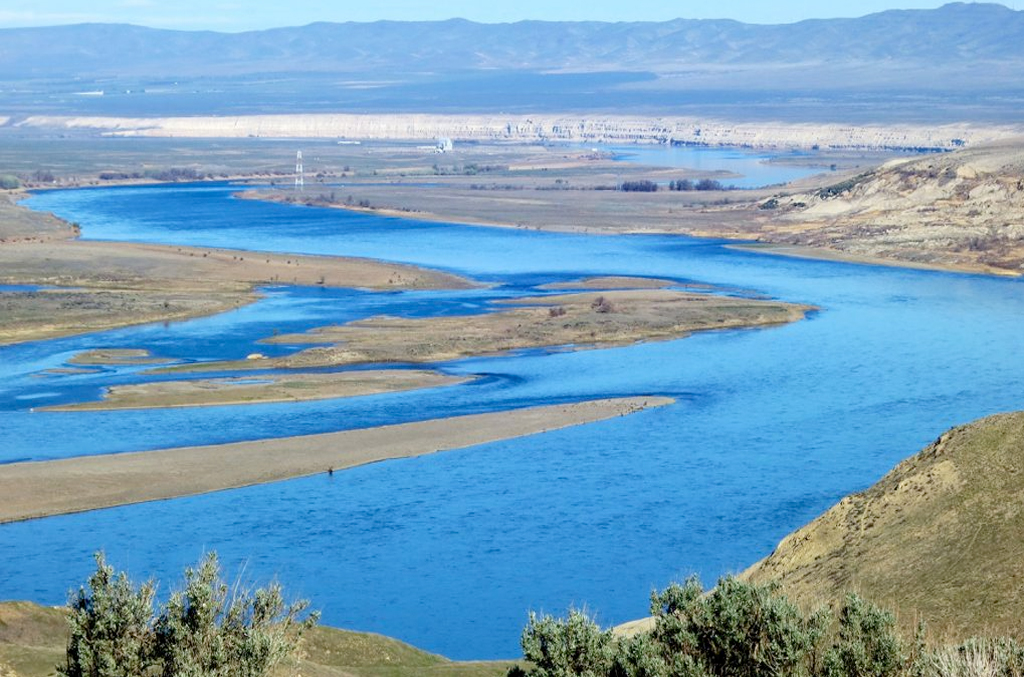 The Bonneville Power Administration claims it is maintaining steady streamflows through Hanford Reach near Richland, Washington so that the eggs and emerging baby Chinook salmon are protected in the last free-flowing segment of the Columbia River. The Hanford Reach supports the largest and most productive population of wild salmon remaining in the Pacific Northwest

But even these fish are in great danger. “We’re losing a ton of fish — direct kills — from hydro operations,” says Bob Heinith, a biologist with the Columbia River Inter-Tribal Fish Commission. “People ought to be just appalled.”

These large, mainstem-spawning fall Chinook are a cornerstone in efforts to preserve and restore widely depleted and at-risk Columbia Basin salmon stocks. Hanford fall Chinook are not listed under the Endangered Species Act, yet they also need protection. They are born in waters already contaminated from the poisonous and radioactive effluent of the Hanford nuclear site.

Hydro facilities under the management of Bonneville and a public utility district upstream are killing tiny Chinook by raising and dropping the river level as 11 feet every day, according to a U.S. Fish and Wildlife report issued in August 2006. During early spring, Grand Coulee shuts down the river every night to follow the public’s pattern of using the most power during the breakfast hour and again in the evening.

When the river drops, water is stored for usage later in the day. But this kills large numbers of tiny fish which are left to die in the desert sun on the hot rocks. Many more are trapped in tiny pools, where they die from lack of oxygen or are eaten by predators.

In 1988, power producers on the Upper Columbia, including Bonneville and the Grant County Public Utility District, agreed to provide sufficient flows to keep salmon nests (redds) covered with water during the fall and winter. But the pact, called the Vernita Bar Agreement, failed to protect baby fry emerging from the nests in spring. An amendment to the agreement in 2004 still fails to prevent the tiny fish from dying, according to a 2006 report from the U.S. Fish and Wildlife Service.

Scientists with the Fish and Wildlife Service “conservatively” estimate that river fluctuations trapped 1.6 million fish in small pools of water during 2003, and of these nearly 1.3 million died. Additional fish died while exposed on the dry river bed. The greater the size and frequency of river fluctuations, the greater the death toll.

Scientists estimate that from 8 million to 28 million baby salmon are born each year in the Hanford Reach. In 2003, dam operations destroyed about 12 percent of the tiny fish. In other years, the death toll could range from 31 to 90 percent of the fish, the study says.

“The scale of these impacts imposed upon the fry population could reduce harvest numbers of all adult Chinook populations in ocean and in-river fisheries by 9,000-170,000 fish,” the study said. “These potential impacts represent large reductions in the allowable harvest of fall Chinook by commercial and sport ocean fisheries, and commercial, sport, and tribal treaty in-river fisheries.”

A separate study conducted by Grant County Public Utility District, estimated only about 500,000 fish were trapped in 2003. The utility owns two upstream dams, Priest Rapid and Wanapum. The Fish and Wildlife Service study demonstrated that Grant County’s results vastly underestimated the harm to the salmon.

Heinith says Grant County is a big part of the problem. “They could help a lot by changing the river flows,” he said.

This stock makes significant economic contributions throughout the Pacific Northwest with ocean, sport and commercial fisheries through Canada and as far north as southeast Alaska. Alaska is so concerned that they co-sponsored the Fish and Wildlife Service study.

The observations of high mortality “in spite of the current protection measures” highlight the need for more measures that can protect the tiny salmon, the study says.