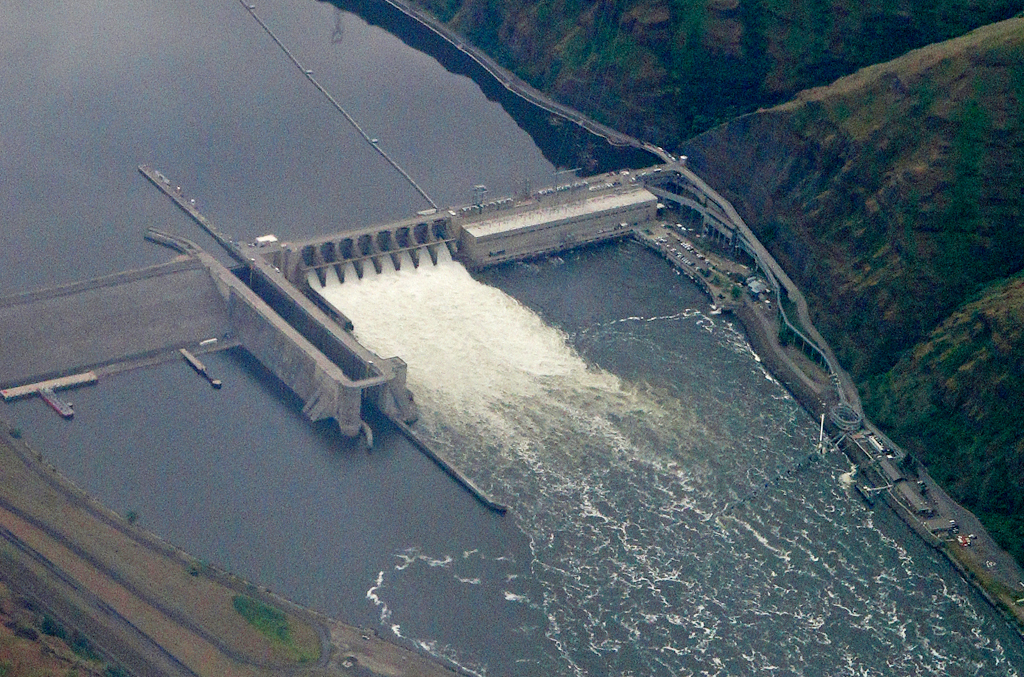 In 1947, Paul Needham of the Oregon State Game Commission observed that if federal dam-builders followed through with plans to build five new dams, including four on the Lower Snake River and one on the Columbia, the salmon would be lost.

“All western fishery biologists with whom I have talked agree that this plan, if followed, will spell the doom of salmon and steelhead migrations up the Snake River as well as up its best tributary, the Salmon River in Idaho,” Needham wrote 60 years ago in Oregon Business Review.

McNary opened in 1953, followed by the four Lower Snake dams: Ice Harbor, Lower Monumental, Little Goose, and Lower Granite in 1961, 1969, 1970, and 1975.
The decline of Snake River salmon followed on their heels. The coho went extinct in the 1980s, and the sockeye are down to the last handful of fish. The steelhead and Chinook are on the Endangered Species List.

In the 1990s, a citizen movement to take out the dams, or at least “breach” them so the Snake can run free again, took root in the Northwest. Breaching the dams was given serious study. NOAA Fisheries under the Clinton administration said dam breaching may be justified. Bruce Babbitt, Clinton’s secretary of Interior, said the administration was leaning in that direction. “The clock just ran out on us,” he said in an interview.

The Rand Corp., a private non-profit organization, said breaching makes economic sense. But the Army Corps of Engineers said it wasn’t justified, and the idea was shelved, at least for a few years.

Further discussion of breaching quieted down as an energy crisis — fueled by the extremely dry weather, the illegal activities of Enron and ill-considered power sales by Bonneville — forced electric rates skyward in the region in 2001.

But NOAA, which in its 2000 biological opinion promised to consider breaching if all else failed, may have no choice but to raise the possibility again. The runs above Bonneville have declined more than 50 percent since 2001, and indicators show a continuing slide for the long term.

Now there is a fourth study, by Save Our Wild Salmon, Taxpayers for Common Sense and other groups that are determined to revive the breaching debate. It has published a new study showing that restoring the Snake can save billions of dollars. Their study found that increased tourism, new outdoor recreation, and improved sport and commercial fishing opportunities could generate substantial additional revenue for the region.

But as soon as the report, entitled “Revenue Stream,” was published in November 2006, it was met with some unfounded criticism by federal agencies and an electric utility group. NOAA Fisheries executive Bob Lohn said just by publishing it, the coalition had done more harm than good. But it’s not clear he actually read the document.

“I'm afraid this probably does not further salmon recovery as I understand it,” said Lohn. “The reason is that the report is clear, simple, elegantly prepared, but glosses over the underlying facts,” he told the Northwest Power and Conservation Council.

It’s not clear what facts Lohn was citing. He said, incorrectly, that the report claims the federal government would save about $600 million a year on salmon recovery programs if the dams come out. He also said the report assumes there would be no money for hatcheries and fish protection, also inaccurately.

Lohn said that the report assumes there would be “no Pacific coast salmon recovery funds for any part of the Columbia Basin, the Mitchell Act (federal hatchery) program would come to an end, the (U.S. Department of Agriculture) would stop spending programs to provide habitat, the Forest Service would no longer need to do fish protection, the EPA would not be providing any regulatory assistance in the direction of salmon and so on.”

None of that is in the report. Instead, the report makes clear that the region would continue to pay hundreds of millions on these programs for saving salmon. The savings would come from spending cuts on Snake River salmon programs.

Northwest River Partners, a group of utilities, farmers and businesses, attacked the report with a number of additional claims that are also not true. It says salmon are already on the road to recovery, so dam removal is not needed.

“Regional efforts to aid salmon are working.” the group said in a statement posted to its web site. “The effort is paying off.”

Members of Northwest River Partners, which include Pacificorp, Portland General Electric, Puget Sound Energy and Tacoma City Light, fear that the cost of power would rise. The actual rate impact is uncertain, but ratepayers would still enjoy some of the cheapest rates in the nation. Bonneville’s rates are 53 percent below the market price.

The dams generate, on average, about 1,000 megawatts of power at any given moment. Replacing that power with wind and conservation would cost up to $170 million in new wind projects and energy efficiency program sin the region.

But Bonneville claims the dams are capable of generating a peak of 3,400 megawatts, and that it would cost more than $400 million a year to replace that capacity with gas-fired combustion turbines. But the Northwest Energy Coalition contends that the dams have been called on to generate that much power only once, in 1982, during a “very high spring run off.” They say that if Bonneville had those turbines on hand, it would crank them up and sell the extra power to California. Bonneville also ignores the role consumers can play by conserving energy at times of the day when consumption is at its highest.

Dam breaching could also solve a vexing environmental problem for Lewiston, Idaho. In Revenue Stream, the groups note that the Snake River is filling up with sediment behind Lower Granite Dam, and could cause severe flooding in the city unless its waterfront levees are heightened.

The Army Corps of Engineers has begun hearings on its proposal to augment the levees.

Lower Granite traps enough sediment every year to raise the reservoir level about 3 inches. The top of the levee is now less than two feet above the reservoir.

The Army Corps could dredge the river every year, but that would cause harm to endangered salmon. The cost would be nearly $100 million, including the price of raising bridges and realigning streets and railroads.

Raised levees would also further remove Lewiston residents from the river, detracting from their quality of life. The proposal has drawn significant local opposition for this reason alone.

The report says the costs of keeping the dams in place could range from $1.65 billion to $11.9 billion over 10 years.

Revenue Stream found that breaching the dams may contribute to the economy in other ways. It would trigger between $1.8 billion and $10.5 billion in new recreation, sportfishing and commercial fishing, and would help fulfill Indian treaty fishing rights. It could infuse new jobs into fishing communities from California to Alaska that have been devastated by fishing closures.

The Northwest River Partners would rather save the salmon by stopping all fishing.
“This report points to an economic boom generated by helping people kill more fish,” the organization says on its web site. “The report seeks to help the fishing industry sell boats, tackle, licenses, motel rooms and fishing equipment so that fishermen can kill returning salmon.”

The hydrosystem, however, kills many more salmon than fishing.