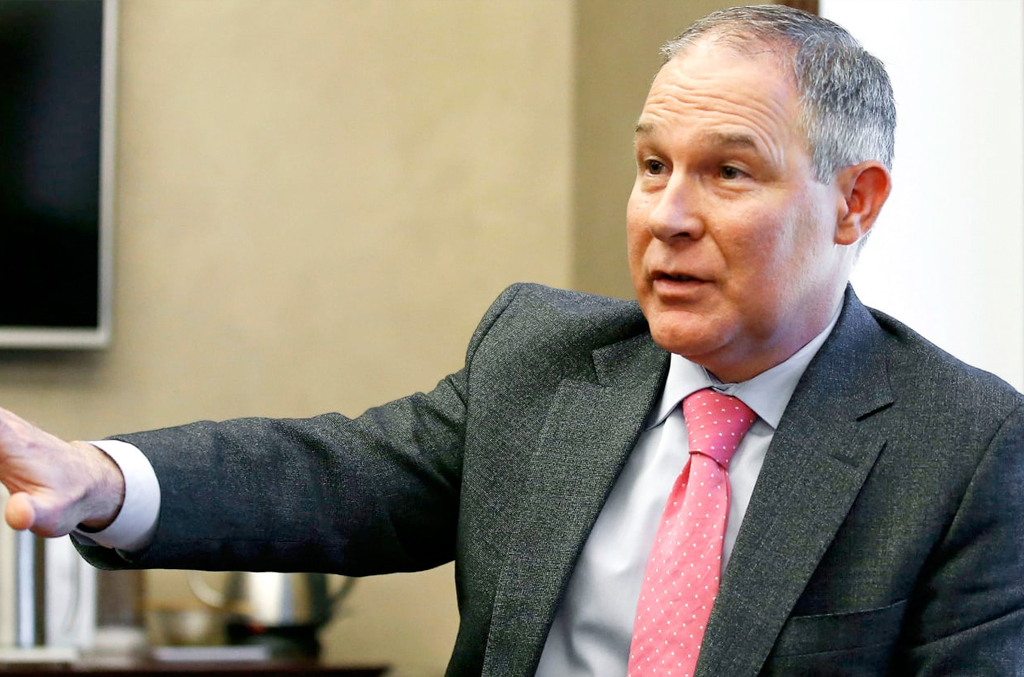 EPA chief fails to explain what data prompted his decision to allow continued use of the toxic pesticide, environmental groups file suit

The US Environmental Protection Agency under President Trump may have stepped into the brave new world of alternative facts.

Last November, after several years of study, the EPA had announced that the insecticide chlorpyrifos poses an unacceptable risk to humans, especially children, when its residue is found in fruits, vegetables, and drinking water.

The finding cited a 2014 Columbia University study and other research showing that young people have suffered diminished cognitive abilities and reduced IQ after chronic exposures. This led the EPA to recommend a ban on all agricultural uses of chlorpyrifos — by far the most heavily used insecticide in the US with 4 to 8 million pounds applied annually.

On a pounds per acre basis, the heaviest applications of chlorpyrifos in the US have been on the Hawaiian island of Kauai, where several large agribusiness have been conducting open-air experiments on genetically modified seeds. (Read my in-depth report, “The Ghost in the GMO Machine.”)

But on March 31 — the day the ban was scheduled to take effect — new EPA Administrator Scott Pruitt determined that chlorpyrifos isn’t dangerous after all and rejected the ban.

Chlorpyrifos is part of a class of chemicals, known as organophosphates, that was developed before World War II as a nerve gas that could halt neurotransmissions in a soldier’s brain. Chlorpyrifos kills bugs by disrupting their brain functions in a similar way.

The Columbia study of pregnant women reported an association between the level of chlorpyrifos residue found in fetal cord blood and neurodevelopmental problems in fetuses and children. An EPA scientific advisory panel that reviewed the study in April 2016 concluded that “there is evidence for adverse health outcomes” at even very low exposure levels. EPA scientists said that the risks that young children face from exposure to food residues of chlorpyrifos alone are 14,000 percent higher than the level they believe — or believed until a few days ago — is safe.

The only significant change at EPA since it issued the preliminary finding last year has been the appointment of Pruitt, a noted climate science skeptic, to its top job. Since the inauguration, Pruitt has been denouncing EPA regulations, especially its Clean Power Plan, an Obama-era measure designed to fight climate change, which he is scrapping to help boost the coal industry.

Similarly, the pesticide manufacturing industry is expected to benefit from his decision to keep chlorpyrifos on the market. Pruitt defended his decision with a vague statement that offered little insight into the rationale behind this change in course.

“By reversing the previous Administration’s steps to ban one of the most widely used pesticides in the world,” Pruitt said, “we are returning to using sound science in decision-making — rather than predetermined results.”

He added that “reliable data, overwhelming in both quantity and quality, contradicts the reliance on — and misapplication of — studies to establish the end points and conclusions used to rationalize the proposal.” But his statement failed to specify what exactly the “reliable data” shows, how it is different from data previously cited by the EPA, which studies it contradicts, or why it contradicts the conclusion reached in November. EPA did not respond to a request to clarify the science as of press time.

Ironically, Pruitt issued his decision on Cesar Chavez Day in California. In 1989, the famous farmworker rights champion had said, “If we ignored pesticide poisoning, if we looked on as farm workers and their children are stricken, then all the other injustices our people face would be compounded by an even more deadly tyranny.”

The EPA’s earlier decision to ban the chemical was triggered by a legal petition filed by the Natural Resources Defense Council and the Pesticide Action Network of North America (PANNA) back in 2007. And on Wednesday morning, the NRDC  and Pesticide Action Network filed a motion in the US Court of Appeals for the Ninth Circuit to force the EPA to ban chlorpyrifos, arguing the agency has not presented any scientific research that justifies the decision to reverse its preliminary finding.

“The Trump administration is not above the law — and we will not let them put our kids at risk,” Erik Olson, senior attorney and Director of the Health Program at NRDC, said in a statement about the new filing. “The science is clear that this chemical is dangerous, yet Administrator Pruitt is ignoring findings from EPA’s own experts and brushing off the courts to keep it on the market. We are asking the court to step-in to keep our children safe.”

“The science is in, and has been for some time,” says Dr. Emily Marquez, a staff scientist at PANNA. “Research shows that chlorpyrifos exposure before birth is sufficient to affect children’s brain development, including changes to the structure of the brain. Delaying further action to protect farmworker families and rural children is irresponsible and unfair.”

Bill Freese, a senior scientist with the Center for Food Safety, an environmental group that did not sign on to the 2007 petition, called the reversal “another example of the Trump administration’s hostility to science, just like climate change denialism. All scientists who have looked at this agree that there is incredibly strong evidence that the neurological impacts are extremely strong, including reduced IQ and pervasive development disorders.”

“Dow AgroSciences remains confident that authorized uses of chlorpyrifos products offer wide margins of protection for human health and safety,” he says. “This is the right decision for farmers who, in about 100 countries, rely on the effectiveness of chlorpyrifos to protect more than 50 crops. We will continue to cooperate with EPA under the established regulatory process in its scientific review of this vital crop protection solution.”

The bug-killer, introduced by Dow Chemical in 1965 as an alternative to DDT, is used in the United States exclusively on crops. In 1990, some 800 different chlorpyrifos-containing products were commonly used around the house. In 2001, after several studies linked exposure to these products to horrific health problems and even deaths among children, the EPA banned its use in homes, schools, parks, and day care centers. But it allowed its use on the farm to continue.

The 2007 petition noted that chlorpyrifos and other organophosphates were originally designed as wartime nerve agents and that these chemicals produce “devastating effects” by shutting down a protein known as acetylcholine that is vital in the transmission of signals in the body’s nervous system.

Clinical symptoms of organophosphate poisoning can include eye pupil contraction, increased salivation, nausea, dizziness, confusion, convulsions, involuntary urination and defecation, and, in extreme cases, death by suffocation resulting from loss of respiratory muscle control. A 2012 study by the Harvard Medical School calculated that organophosphate poisoning can cost a child up to six IQ points.

A team of University of California, Berkeley scientists, examining the impacts of organophosphate poisoning on women and children in the Salinas Valley found that for every 522 pounds of combined organophosphate pesticide applications within 1 kilometer of a pregnant woman’s home, a child at age 7 loses two IQ points.

With the rollback of a federal ban on chlorpyrifos, California farmworkers are calling on Governor Jerry Brown to move swiftly and enact an immediate statewide ban. About a million pounds of the chemical are used on California farms every year.

“Chlorpyrifos poses a serious threat to children across the state, particularly those in agricultural communities,” said Francisco Rodriguez, president of the Pajaro Valley Federation of Teachers and father of a young child. “Regulators have delayed action for too long and California must step up to defend the health and cognition of our children.”

Meanwhile, in February state legislators in Hawaii — anticipating Pruitt’s decision — introduced a bill to ban chlorpyrifos in that state, where just last year, 10 workers at a Syngenta GMO research station on Kauai were hospitalized due to chlorpyrifos exposure. However, the bill has stalled and is not likely to pass.

“This is why the chlorpyrifos bill should move forward,” said Mary Lacques, a spokeswoman for Hawai'i SEED, a group that advocates for diverse, agroecological food production on the islands. “It’s clear we cannot depend on the EPA to protect children and farmworkers from this dangerous pesticide.”