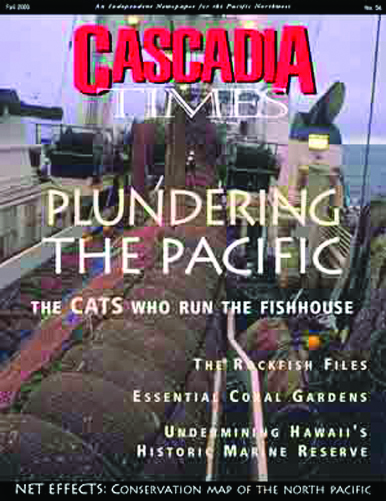 The John B. Oakes Award for Distinguished Environmental Journalism recognizes journalists whose work meets the highest standards of journalistic excellence. It is presented in the fall at Columbia Journalism School.

In February 2005, the eleventh annual John B. Oakes Award for Distinguished Environmental Journalism and its $5,000 prize was awarded to Paul Koberstein, editor and publisher of the Cascadia Times of Portland, Oregon, and the author of the newspaper's special issue “Plundering the Pacific.”

The awards panel said, "Koberstein examines the federally appointed committees that oversee U.S. fisheries and finds them rife with conflicts of interest. These councils' shoddy management of marine resources, Koberstein writes, has a direct and damaging effect on the very seas they were established to protect."

“The Oakes judges applaud the craft and commitment that make this work of independent, investigative journalism stand out in a field of outstanding contenders,” said Joan Konner, chair of the Oakes Award Committee of Judges and professor and dean emerita of the Columbia Graduate School of Journalism.

“It is an example of how a small, underfunded, independent publication can make a difference, especially at this time of destructive political incursions into the rules and regulations that protect natural resources and the environment.”

Runners-up for the 2004 Oakes Award included the Fort Worth Star-Telegram, the Los Angeles Times, New York Times Magazine and the South Florida Sun-Sentinel.

The John B. Oakes Award for Distinguished Environmental Journalism was created and endowed in 1993 by friends and colleagues of John Oakes, former editorial page editor at The New York Times and creator of the contemporary op-ed page.

Journalism on Behalf of the Planet.

Powered by its readers.